Priyanka Chopra knows how to step out in style. The actress made a stunning appearance at a Bulgari event in Paris on Tuesday. The “Baywatch” star was recently announced as one of the four new ambassadors for the jewelry brand as well as, Zendaya, Anne Hathaway and BLACKPINK’s Lisa.

Chopra was spotted out in a black and white gown by Robert Wun. Styled by Law Roach, the show-stopping number featured a form-fitting black central dress. The eye-catching element came from the oversized white ruffled embellishment that fanned behind her neck and appeared along the side of the hip and on the hemline. Crisscrossing straps at the back added a sultry modern touch, and the dress’s plunging, deep V-neckline also made way for Chopra’s glittering diamond choker necklace and matching earrings to take center stage.

To give her ensemble the moment it deserved, the “Quantico” alum styled her signature brunette tresses in a romantic updo and let soft curled bangs frame her face. She continued with dewy neutral glam and matte pink pout. As for footwear, a black 6-inch heel peaked out from under her gown. The silhouette appeared to have a chunky outsole and towering leather heel.

Chopra has really upped the style stakes since collaborating with celebrity stylist Law Roach. The pair’s working relationship has really shined a light on all that she has to offer and her latest look is no exception. The model has always described her style as classy and chic. She tends to gravitate towards statement dresses, dashing outerwear and oversized tailoring. Chopra’s shoe wardrobe includes height-defying heels, sleek sneakers, sharp boots and pointed-toe pumps. 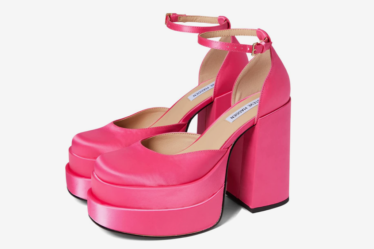 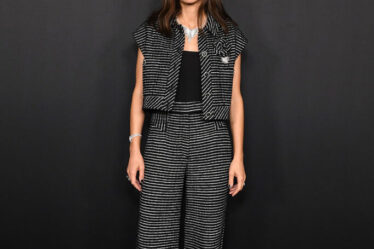